The Nazi threat emerges from Germany 1933 and shatters the small town life in Krasnik south of Lublin in eastern Poland. The teenager Mischa Stahlhammer manages to escape from a German work camp and joins Polish partisans. He survives by becoming a specialist in arming and disarming mines, the most dangerous of all missions. After the war he ends up in Sweden, meets Sonja, who also lost her family and youth in German concentration camps. Their son Semmy, born in Eskilstuna, tells the story of what a boy, his family and friends had to live through in Poland before, during and after the Second World War, and how love gives him back the will to live – and the strength to create a new life in a foreign land.

Semmy Stahlhammer is First Concertmaster at the Stockholm Royal Opera, leader of Stahlhammer Klezmer Classic and artistic director of the music festival in San Giovanni in Tuscany, Italy. In his violin ateljé on Norr Mälarstrand in Stockholm he restores and repairs string instruments.

Semmy has captured his father’s life fate with a dry realism that haunts the reader and leaves her without repose or peace. Thure Stenström, Svenska Dagbladet

A testimony of love – to life itself – artless and highly dramatic. Per Svensson, kulturchef Expressen, Judisk Krönika

Something of the best I have read in the partisan-genre. –Painfully truthful and passionate- Salomon Schulman, Obs! Kulturkvarten, Sveriges Radio P1

-this is an indispensable form of history writing. -these events belong to humanity's collected, common experiences. Håkan Möller, Hufvudstadsbladet, Finland

-it is scary to read about the situation Mischa was in during the war years. -a unique document from the 20th century, a story of survival… Daniela Floman, Göteborgsposten

This fascinating biography becomes the more worth reading since the son, Semmy Stahlhammer, has edited and condensed his fathers aural account in such a skillful, well balanced and eloquent manner. Tore Winqvist. Uppsala Nya Tidning

The story is straightforward with a fascinating richness in detail. Out of the actual rendering, the feelings shine through without abundant gestures, just through well chosen words. A detailed historical account with a convincing realism. Ivan Österblad, Länstidningen Södertälje

Straightforward, almost artless, he lets the father speak. This simplicity in the description makes you captivated by the contents, a fate of the times. Codename Barber is a naked document of a life destiny characterized by war, horror and persecution. Inger Dahlman, Sundsvalls Tidning

When the war was over he had experiences what nobody should have to bear and carry with them through life. Bengt Faleij, Västervikstidningen

A strong story that becomes especially interesting through Mischa’s fantastic memory for details. One cannot comprehend that he survived. Lars Landström, Härnösands Allehanda

Mischa remembers how he felt safer in a German work camp than among the Polish peasants and partisans. Patrik Uhlman, Eskilstunakuriren

It was a life under constant death threat, not only from the German Nazis, but also from Poles, even among the Communist partisans. Ernst Klein, Östgöta-Correspondenten

The story of a man, who not only survives the Nazis, but also the strong antisemitism in Poland. AS, Byggnadsarbetaren

- a straightforward and frank story that moves you. It testifies of a brutality that is hard to understand, but it is also a testimony about a brave person who against all odds survived. Kjell-Ove Cederqvist, Dagbladet, Sundsvall

- a staggering description of the horror and hardships of war, with deep inhuman humiliation. Håkan Philipsson, Bibliotekstjänst

Semmy lets the father tell his story in first person, filled with the coincidences of the adventure–novel, illuminated with the genuineness in the experiences. The language has an impressive flow and keeps the right tone-balance throughout, captivates and holds the reader with a feeling of self-evident ease. Anna Rikner, Biblioteket i focus

”Codename Barber” is a captivating story and a unique document of a human fate. Sören Sommelius, Helsingborgs Dagblad

Mischa Stahlhammer stood in front of his own grave seconds before his execution. Fate wanted otherwise. Kristina Svensson, Pennan & Svärdet 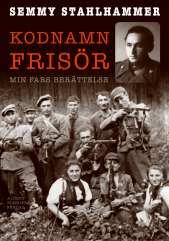